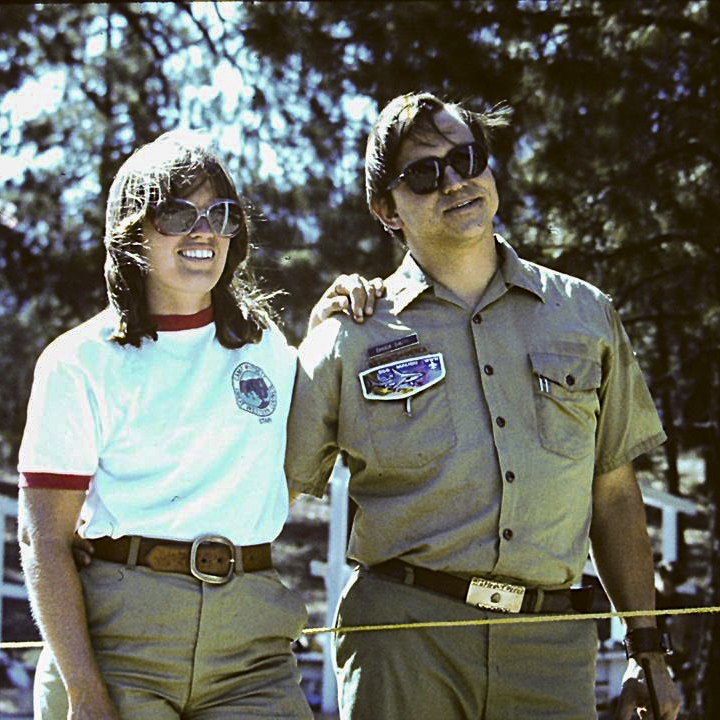 My name is Chuck Smith. I’m married to Pat Smith whom I met at Camp Whitsett July 2, 1977. She was Aquatics Director and I was Program Director. We became engaged on July 30, and were married on October 22. We have two children, Matt and Becky. Both of them grew up in Camp and eventually worked there, too. I have two grandsons, Simon and Miles. Simon was a CIT in 2019 and full staff in 2020, making him 3rd generation Whitsett Staff.

I enjoy camping and photography, and have taken thousands of photos at Whitsett. I taught for 32 years, living in the Kern Valley for most of my teaching career. I taught in several schools including at the Johnsondale school when the town ran the lumber mill. When the town closed in 1979 where I spent 22 years, serving as an part-time administrator for five years, and Principal for two.

I went to work for Kern County as the Program Supervisor for a residential outdoor science school, Camp K.E.E.P. located near Glenville. I was Principal of the hands-on Science School, and Camp Director for the facility. I’d go to the Camp on Monday morning, the school would arrive in the afternoon, and I’d leave for home on Friday afternoon after the school left. After that campus closed, I went to work as a teacher in the Jamison Center Children’s Shelter in Bakersfield. I retired after 32 years of teaching, my last assignment as a teacher in the Kern County Juvenile Hall.

I joined Scouting late, in 1959, when I was fourteen. I was in Canoga Park Scout Troop 316 for two years, and spent a week both summers at Whitsett: one summer in camp, one summer on the Silver Knapsack Trail. I was a charter member of Explorer Post 316 when I was 16, and was elected into the Order of the Arrow … I took my Ordeal at Whitsett. When I was eighteen, our OA Chapter was called upon to provide a leader for Scout Troop 315 (an adult had dropped out at the last minute) – I volunteered and had such a great time, that I joined the Troop as an assistant Scoutmaster. I also continued with the Post. I continued with the OA, going for Brotherhood at 18.

I did a lot of hiking with T316 and Post 316, including a weekend hike at the Grand Canyon (down one trail, overnighted at the Phantom Ranch, and back to the top the next day. I hiked the John Muir Trail in four weeks, between Mt. Whitney and Yosemite over two summers.

I was drafted in 1966 and after Basic, when at Radio Teletype School at Ft. Gordon, GA, I sought out the base Scout Troop and became an assistant Scoutmaster (I think T99). I was deployed to Germany, and shortly after sought out the Scout Troop in Pirmasens, the local U.S. Army base. I spent over a year there, first as assistant Scoutmaster and later Scoutmaster of the Troop. When I returned home I rejoined T315, but also helped a Mr. George Mueller who was called in to help Troops on the verge of folding. He worked with the adult leaders, I helped train the boy leaders. In that manner, I got to work with a number of Troops in the old Topanga District. I was also a member of the District HAT, helping to train adult leaders in outdoor skills. I was elected to Vigil in the OA in 1968, and received the District Award of Merit somewhat later.

When I moved to the Kern Valley, I was asked to take over the Scout Troop at the local Elks Lodge. I helped start Cub Pack and Scout at the school where I taught, following my son to and after his Eagle. During all that time I was also registered with the WLACC because of Summer Camp.

I went to Whitsett in 1959 for a week with my Scout Troop – I think we camped in the Tillamook/Monachi campsite. I was at Whitsett in 1960, passing through to hike the Silver Knapsack Trail. I was at Camp for my Ordeal and subsequent Ordeals through 1966. I also served as Ordeal Advisor on of those years. In 1963 or ‘64, I attended Whitsett as a leader.

When I got back from the Army in 1968, I walked into the Scout Office to say “hi” to everyone. Mr. Richard Hipskind saw me, shook my hand, and said, “Chuck! Welcome back. And congratulations, you’re the new Nature Director at Camp Whitsett this summer.” I was drafted, and accepted. I couldn’t work the summers of 2969, ‘70, and ‘71, but spent at least two or three weekends visiting, and in ‘69 and ‘70, also spent two weeks helping. I returned to Whitsett in 1972 as a Camp Commissioner. In 1973, after the merger of the San Fernando Valley and Crescent Bay Councils, I applied and became Program Director. I met my wife there in 1977, and became Camp Director in 1978. I continued in that position for nine years, leaving in 1986.

After a three year hiatus (although I went up as a a Volunteer Commissioner for two weeks at a time in 1987 & ‘88 andwas in Camp for two days in 1989), I rejoined Whitsett Staff in 1990 as Program Director – a position I held through 2005. Clif Stewart came on board and I served as Camp Administrator (basically helping get the new directors up to speed, and running the new Camp computer Merit Badge system). In 2009 I was Outpost Director in the very successful Carver Ranch Experience. Ending 36 years of Camp Staff.

Since then, I have been to Camp at least one weekend, and at least three times for a two-week stint as Volunteer Commissioner. I have been a FoCW member since it’s start in 1996, having a two-year run as Board President.

In summary — I was out a year after cancer surgery, and two years during my deployment, but have almost spent at least a day or two at Whitsett since my first visit in 1959