A Journey through 75 years of Scout Camp Memories

Chuck Smith has a sixty plus year relationship with Camp Whitsett. He digs into all his memories and combines them with the memories of other Staff and Campers, to create a book that tells the story of Camp Whitsett during its 75 years of operation.

His narrative includes the story of William Paul Whitsett, after whom the camp is named, the actual first year of campers, through the growth of the camp from 20 acres to its current size. He tells about the creation of the camp lake, and the evolution of the various program areas. Chuck includes some of his photographs and a number from other staff who were part of camp very early on, to complete the Whitsett Story.

While not ALL inclusive, an all-inclusive book would probably be quadruple the size, it does put forward a fairly complete story of a much-loved Boy Scout Camp. Read and enjoy this story-telling narrative of Camp Whitsett: a Journey of 75 years of Scout Camp Memories. 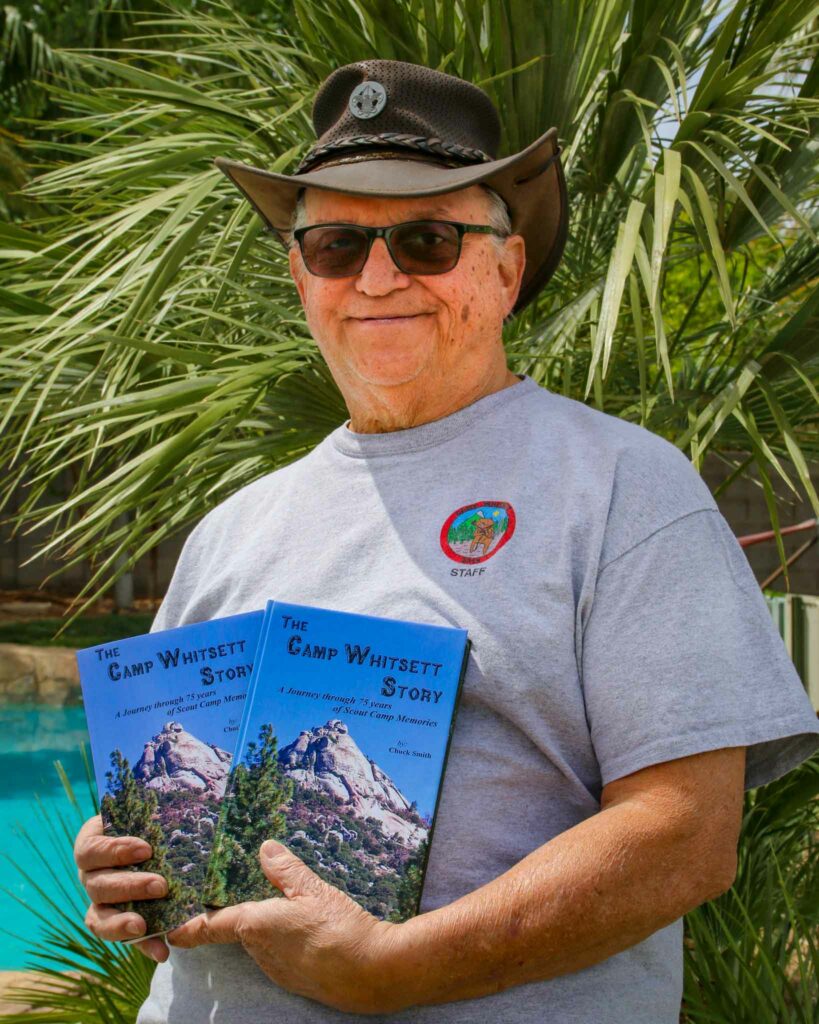 Chuck Smith started at Whitsett as a first-time camper, when he joined Scouts at the age of 14. He spent the next summer on the Silver Knapsack trail, as well as several summers as a young Assistant Scoutmaster with a Canoga Park troop. Chuck first worked on Whitsett Staff as the Nature Director in 1968, a Camp Commissioner in 1972, and camp on board in 1973 as Program Director. He spent 36 years of the next 42 on Whitsett Staff, as either Camp Director or Program Director.

Chuck spent many years in Scouting as a Scout, Explorer and various adult leadership positions. He worked with a Troop at Fort Gordon GA when he was going through Radio-Teletype school while in the Army, and with an American Troop on the Army base in Pirmasens, Germany. Chuck met his wife at Whitsett and they spent their summers there during their breaks from teaching. Even after leaving his paid-staff position, Chuck has been back many summers as a volunteer commissioner while enjoying retirement.

Chuck also worked at other Scout Camps. For three years he was the Weekend Staff at Jubliee Scout Ranch (while away from Whitsett), run by WLACC. Plus two other Summer camps: one summer as Shooting Sports Director at Camp Del Web High Adventure Base in Utah, and three summers as Program Director at Kimball Scout Reservation just outside Las Vegas. Both camps were operated by the Las Vegas Area Council.

Chuck plans include spending more summers at Camp Whitsett as a Camp Commissioner. He wants to help with Camp operating and be in Camp to tell the story of Camp Whitsett to Scouts and Leaders who might be interested.

Please consider donating the suggested amounts for each book. All net proceeds are benefiting Camp Whitsett.

There are no reviews yet.

Only logged in customers who have purchased this product may leave a review.